Bunnie hopped her way down a long corridor. The bright lights were blinding her and she had a headache. She was in a hurry. The walls were lined with celebratory portraits of animals and insects from all over the world; intricate batiks and weaves as well as paintings in ostentatious frames. The high ceilings and open views from the large windows made her nervous, jumpy. Frankly. she would be glad when this was over. 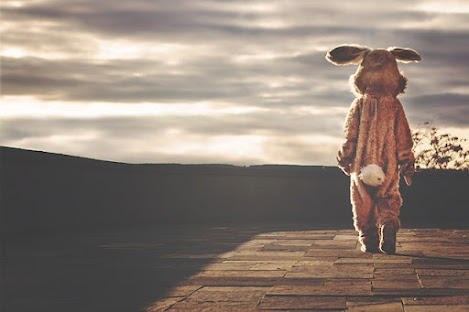 Someone startled her, trotting up from behind, clippety-clopping loudly. They overtook her, turning to look at her huge brown eyes. It was a man with long grey hair. He shimmied his main proudly and smiled before clippety-clopping ahead in worn black shoes that had seen better days.
Bunnie smiled back, nervously. She needed all the support she could rally, being a stranger here.
Bunnie is nervous
At the double doors, a woman waited. She looked Bunnie up and down with a supercilious stare then looked at the door.
Bunnie felt awkward and was uncertain of her next move. Should she barge passed? She stopped briefly and lent forward to open the door, waiting for the stranger to go through.
The woman just looked at Bunnie then turned away to glance outside through an adjacent window at the view. Then, just as Bunnie tried to make her own way through the door, the woman leaped in front of her nearly tripping her over.
Bunnie called out a mild expletive and the woman turned around and hissed something back at her, running off to the food area.

Bunnie was feeling agitated. She had been told to meet someone called Ratindra.
Apparently, she was distinctive looking because of her very long nails.
‘You can’t miss her,’ the concierge had added, ‘she has sticky-out ears too and sits watching everyone from a table in the corner by the drinks cooler.’
The cafeteria was large and busy. There were people all around; running, walking, sitting, some slow, some fast, some skittish, some brazen, some reading, some eating. There was a lot of noise too and Bunnie wondered what they all did here, this diverse group of characters all having refreshments in the cafeteria. There was a lot to take in.
Bunnie spotted Ratindra at last, who was just as the concierge had described.
‘Hi Bunnie,’ said Ratindra, ‘We have been expecting you.’
‘Hi,’ Bunnie replied nervously, ‘what is this place, why am I here?’
Ratindra wiped something off her cheek with the back of her hand and scratched her long nose.
‘Ah, have they not explained? Let me go over things. This is the pre-metamorphosis area. This is just where you come to sort out paperwork before your change.’
Bunnie looked confused.
‘Sorry, I don’t understand.’
Ratindra wiped her cheek again and started nibbling her long nails with her front teeth.
‘Interesting,’ mused Ratindra, ‘where are your papers?’
‘Papers, what papers? I don’t have any papers. You mean like a passport or something?’ asked Bunnie, now feeling self-conscious.
Ratindra sighed.
‘Wait here,’ she said, ‘I will be right back.’
A few minutes later Ratindra returned with a colleague.
‘This is Camila, she said,’ 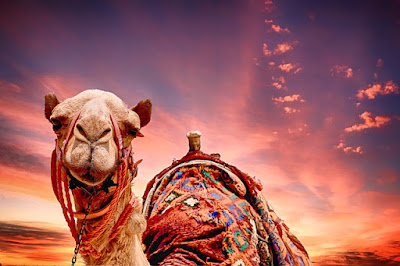 Camila was a top-heavy lady with a hunchback. She had long fluffy eyelashes and as she read her notes, repeatedly flared her nostrils. Ratindra offered her some water which she declined.
‘Just to clarify, Bunnie,’ said Camila, ‘you
don’t have your notes?’
‘No,’ said Bunnie, with a sigh. ‘I was just told to come here immediately after the prang in the car.’
Ratindra and Camilla looked at one another. Ratindra spoke first, ‘I think we may need to speak to Eddy,’ she whispered, ‘there may have been yet another bureaucratic balls-up.'
Eddy joined the group ten minutes later giving Ratindra and Camila a great big hug. He was a large rotund man with lots of facial hair and a bounding gait. He moved down to hug Bunnie too, who panicked, but then realised he needed to be professional in the circumstances and sat down instead to look through his stack of papers.
‘So, Bunnie,’ he said, in a deep baritone voice, ‘do you understand where you are and why you are here?’
‘No,’ said Bunnie, fidgeting and beginning to feel anxious.
‘Let me explain. I am sorry if this is a shock but you are dead. This is the metamorphosis centre where you are booked in for your transformation into your spirit animal.’
‘Dead!’ shouted Bunnie, ‘but I am here and very alive thank you very much.’
‘Hmmmm, no not really,’ said Eddy, you were killed twenty minutes ago in a car crash.’
Bunnie thought for a minute and looked down at her body. Something wasn’t quite right.
Things were misaligned and there was dried blood on her dress. Suddenly everything hurt.
‘So, what happens now?’ she asked, beginning to fear the worst. Do I find out if it's Heaven or Hell or something? What exactly IS the procedure?’
Suddenly a man came running over excitedly, jumping from one leg to the other. He ran off again to grab a clipboard then ran back to the table where he finally and sat down.
‘Hi Camilla, Hi Eddy, Hi Ratindra, Hi Bunnie,’ he said panting, ‘I’m Heinz, very pleased to meet you.' Heinz lifted his hand purposefully but clumsily and put it on Bunnie's, so she shook it obligingly assuming it was protocol.
‘Look, there seems to be an issue, Bunnie,’ he said.
‘You don’t seem to have been allocated a spirit animal for your metamorphosis today.’
Bunnie looked at Eddy and said because she could think of nothing else, ‘well someone isn’t doing their job properly are they?’
The four people opposite her gasped in unison. Heinz licked his lips and avoided eye contact. Camilla snorted, Ratindra twitched and Eddy rubbed his eyes.
‘No, Bunnie, you see, it isn’t us, it’s you,’ said Heinz. 'You need to choose your spirit animal before you die otherwise you can’t go through to the next level of metamorphosis. This is basic. You have really been remiss. It’s surprising as you are already an adult. Most people know early on and certainly decide before they get to the cafeteria.’
Everyone stared at Bunnie.
‘So, what now?’ She asked, also feeling concerned about being dead.
Ratindra spoke. ‘You have to go back,’ she said. ‘It’s disappointing I know. The spirit animal phase is really so much better than the human one. But you will get another chance Bunnie, eventually, I promise. You just need to open your heart.’
Camila, accidentally spitting again, added, ‘you have probably just been too busy dear.'
The loud sirens woke Bunnie up with a start. People were running around making a fuss.
‘You’re Ok love, ‘said the paramedic, lucky miss if you ask me. Let’s give you the once over in the ambulance to make sure nothing is broken and get you to the hospital.'
‘Did I pass out?’ she asked.
‘Just a few seconds love, so we need to watch for concussion. It’s a big shock, a crash like that. Airbag and seat belt saved your life probably.’
A few days later when Bunnie had returned home, her sister came to visit. All her many siblings and extended family had been visiting in an endless caring stream and she had been busy serving nibbles and refreshments now for days. It was exhausting. She was really looking forward to some alone time.
‘I’ve brought you a surprise,’ her sister said excitedly. ‘You spend way too much time running around and working. It is time to take things easy. But I think you need to have some company to share the quiet moments and someone to love when we are not here.’
She presented Bunnie with a large cardboard box wrapped in red ribbons.
‘Go on, open it’ she said.
Inside was a warm fluffy ball looking up at her nervously. It the most beautiful long-eared baby rabbit Bunnie had ever seen.
'I saw him and thought of you, you were made for each other,' said her sister.
Bunnie gently lifted him out, enraptured and filled with glee. She held him in her arms like a newborn baby and shed a tear of happiness.
Then the two new friends rubbed noses and stared into each other's big round chocolate eyes for a very long time.
© 2019 Sarnia de la Maré FRSA
- December 23, 2021